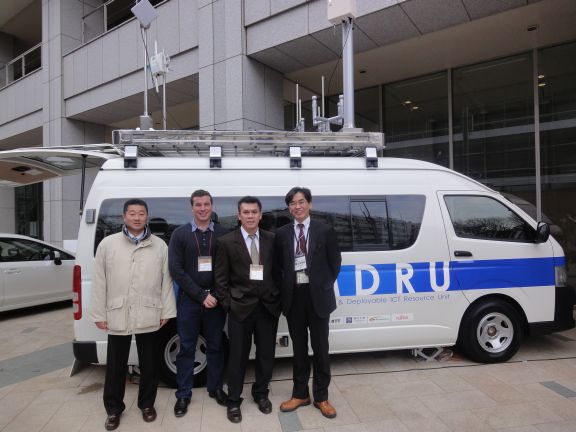 The forum showcases the research and development achievements of the NTT Group of companies. Various lectures and exhibits highlighted achievements and implementation on global cloud, security, network, user experiences and big data services.

Among the exhibits was the NTT-NIL project on the Moveable and Deployable Resource Unit (MDRU) under Mr. Toshikazu Sakano. The project during the forum garnered a “Recommended Exhibit” title.

The MDRU is a movable container which accommodates information, networking and processing functionalities. During disaster the MDRU can easily be transported to the affected areas and form a wireless access network and offers ICT services to the areas rapidly, easily and with minimum workforce and other requirements.

During the forum Director Llanto discussed the partnership of NTT-NIL and CVISNET for the possible implementation of the MDRU in the Philippines.

Previously in 2013, both NTT and CVISNET were awardees by the UN organization ITU. NTT submitted the MDRU project, while CVISNET submitted the project Broadband for Communities / Schools.

Copyright All rights reserved
BACK TO TOP